Home » Professional » Research » Developing Latin America » Is information enough to save the region?

Is information enough to save the region? 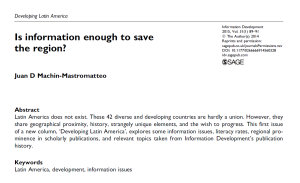 On the past issue of Information Development (IDV) (Published November 2014), we had to part ways with and wish our best to our fellow Editorial Advisory Board Member (EABM) Archie Dick and his column African Information Initiatives. Some months ago, IDV Editor asked EABM for ideas on a new regular column. For me, the prospect of being in charge of a new column was very attractive from the beginning and I had a clear idea to propose: if we had a column about Africa, then the most logical choice is to continue with a column about Latin America (LA). Before making my suggestion, I knew that writing a column for every IDV issue involves a huge challenge: have the discipline of writing something interesting while keeping up with the journal’s deadlines. However, it could be a very important achievement as the proposed column’s debut would coincide with IDV’s 30th anniversary. Moreover, it is an outstanding opportunity for me as a scholar, in order to be able share some thoughts and concerns in the personal and pleasing, but didactic format of an ongoing opinion column. Furthermore, this gives me the chance to deepen my own understanding about some topics that are strategic to the region before writing the lines you will read on the next issues. Hence, Developing Latin America was my proposal, which was accepted and encouraged by our Editor and my fellow EABM, for which I am very thankful.

The final running title was almost a last minute decision. When I was rushing to get this first column written I only had a handful of obvious and bland titles. Although this final title is very simple, the intention is for it to be somehow provocative. LA is a region with many issues and challenges and sadly it does not feature as prominently as many of us would like in academic journals such as the present; there are neither many articles written by Latin American authors, nor many articles written about the region (at least in the Library and Information Science field). Moreover, in most of the cases that the region is mentioned in scholarly communications it is done tangentially. Furthermore, there is not much published about information initiatives and milestones in LA, when we compare it to other regions, and this issue is not exclusive to IDV. A prominent problem is to blame: the language barrier for information professionals to be able to write in English journals when the languages of the region are mostly Spanish, Portuguese, French, all the indigenous languages, and English is spoken as a main language a very small proportion of LA countries. For all the above, I am using in the title of the column series form of the verb ‘developing’, as this means: a reminder that the region is and has to be developed, this is a work-in-progress, the aim is to work toward its development, try our best to advance with the region, and most importantly, communicate regional achievements in journals such as IDV. I should dedicate some lines to the other part of the column’s title “Latin America”, because this is not a totally clear distinction, although we are using it for the sake of practicality. Unless stated otherwise, when I mention LA, I will mean all Latin American countries including Caribbean countries, from Mexico to Argentina, including nations along the Caribbean Sea and those of Central America.

I was keen on the idea of writing this introduction to the column, because I also took the opportunity to review the articles about LA (and from LA authors) that have been published in these 30 years of IDV, thus tracing the representation of the region in IDV and providing some insights and an interesting basis for discussing and updating on some issues that have already been posted in IDV. All the above and much more is available in this first issue of Developing Latin America, which starts with the question: is information enough to save the region?

Abstract: Latin America does not exist. These 42 diverse and developing countries are hardly a union. However, they share geographical proximity, history, strangely unique elements, and the wish to progress. This first issue of a new column, ‘Developing Latin America’, explores some information issues, literacy rates, regional prominence in scholarly publications, and relevant topics taken from Information Development’s publication history.

By judamasmas in Developing Latin America, Research on 2015/01/16.
← Los números de 2014 The arrival of information literacy →

Give me a gift from Amazon!